Galatea was a beautiful Sicilian sea nymph, the most lovely and beloved of the 50 Nereids of Greek myth. She lived by an island where Acis, a handsome human shepherd and the Cyclops Polyphemus had their flocks of sheep and both men were deeply in love with her.

Acis’ father was Pan, ancient God of the Wild, of shepherds and their flocks and of rustic music, a faun with a goat’s hindquarters and horns. Acis’ mother was a river-nymph, daughter of the Eastern Sicilian river god Symaithos. The Symaithos River runs from the Nebrodes Mountains in the north and flows around Mount Etna into the Mediterranean South of Catania.

Polyphemus was the one-eyed giant son of the sea-nymph, Thoosa and Poseidon, God of the Sea, whose main symbol is the trident.

Both young men pursued Galatea, but she was in love with Acis. One day Polyphemus saw them together asleep on a grassy knoll and grabbed a boulder from the side of the mountain, which he hurled at Acis. Galatea leapt into the water, but Acis was killed. As his purple blood flowed, forming a stream under the rock, Galatea came back and turned it into an eternal river, the river Acis, 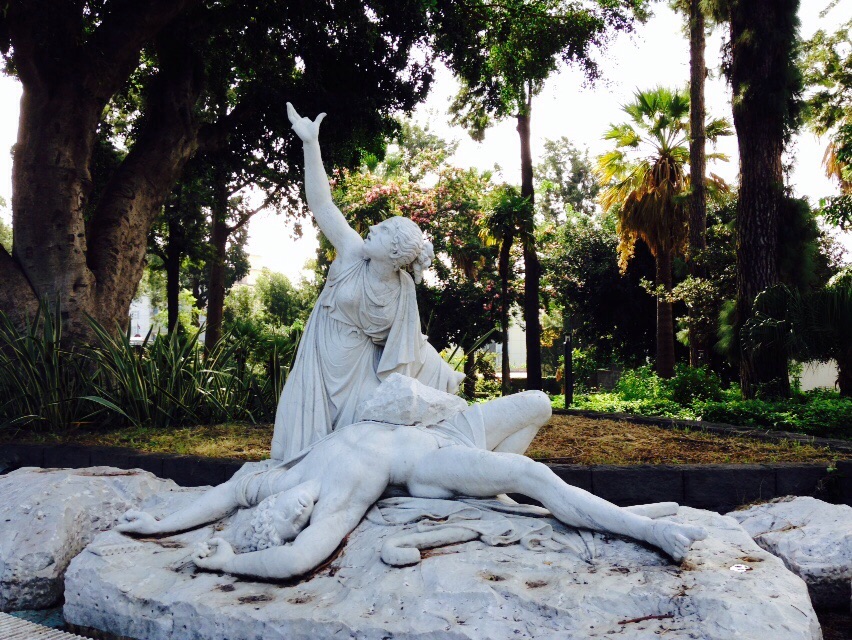 Ovid wrote in his Metamorphoses:

The stone was cleft, and through the yawning chink
New reeds arose, on the new river’s brink.
The rock, from out its hollow womb, disclos’d
A sound like water in its course oppos’d,
When (wond’rous to behold), full in the flood,
Up starts a youth, and navel high he stood.
Horns from his temples rise; and either horn
Thick wreaths of reeds (his native growth) adorn.
Were not his stature taller than before,
His bulk augmented, and his beauty more,
His colour blue; for Acis he might pass:
And Acis chang’d into a stream he was,
But mine no more; he rowls along the plains
With rapid motion, and his name retains.